“Pasta drying in air flow is a complex phase in the pasta making process. Traditionally, dehydration temperatures range between 50 and 120° C. However, within the range of methods available, there is also scope for low temperature drying. The study of drying kinetics, which describes the change in water content of the product over time, as well as factors influencing this process, is useful in order to understand the necessary times and methodologies required. In the following article, we publish the results of a study conducted in collaboration with the artisan pasta-making factory owned by Fabbri, who made available the premises for the analysis of drying kinetics under low-temperature airflow.

One of the fundamental and critical control points in the dried pasta production is the drying process in air flow (Zanoni, 2006). Depending on the dry bulb temperature of the hot air used, three modes of drying are generally used (Kill and Turnbull, 2008):

However, there are less-studied cases of very low temperature (around 30° C) drying, over a long time duration, in the order of days. The aim of the present research is to build the drying kinetics during very low-temperature drying and understand the phenomenology.

The importance of air

The study was conducted within the Fabbri artisan pasta factory in Greve in Chianti (Florence, Italy). The production process included the kneading (mixing) of semolina with water under vacuum for about 25 minutes. Thereafter, the dough was extruded, cut into shapes, and the pasta pre-dried in a discontinuous dryer. The short pasta shapes were pre-dried using a tower dryer, whilst longer shapes were pre-dried in a tunnel dryer. The pre-drying air temperature was 33-35° C and relative humidity, approximately 85%. Pre-drying times ranged between 25-30 minutes for the short pasta formats and 60 minutes for long pasta format. Pre-drying resulted in a 4-6% moisture content reduction from the respective initial values after extrusion.

The pasta was subsequently transferred to a discontinuous dryer cabinet, operating with an air flow set at 30° C. The drying times were 3-4 days and 5-6 days for the short and long pasta shapes, respectively. The above mentioned time periods included a period of one day, required for the stabilization and cooling phases. The dried pasta was then sent forpackaging. In the present research, four different pasta shapes were were analyzed, one long and three short, which the factory classified as “spaghetti”, “penne-rigate”,”casarecce”, and “stracci”, respectively. For each drying treatment, temperature and relative humidity were monitored.

For the kinetics drying study, a sample of 500 grams of moist pasta (freshly extruded) was used for each type of pasta shape. The initial moisture content was measured gravimetrically with drying in an oven at 100° C for about three days. The pasta samples then underwent the respective pre-drying and drying phases, during which samples were periodically taken and weighed to determine moisture content. The first sampling was performed at the end of the pre-drying phase, after which sampling was undertaken every four hours during the drying phase. Taking into account the decrease in pasta weight, humidity values were calculated using a spreadsheet, from which the absolute humidity values and the speed of drying were calculated. From the data, it was possible to build kinetic drying diagrams for each type of pasta. A sample of dried pasta was taken after the drying period and it was measured final moisture to validate the calculated data of drying kinetics.” 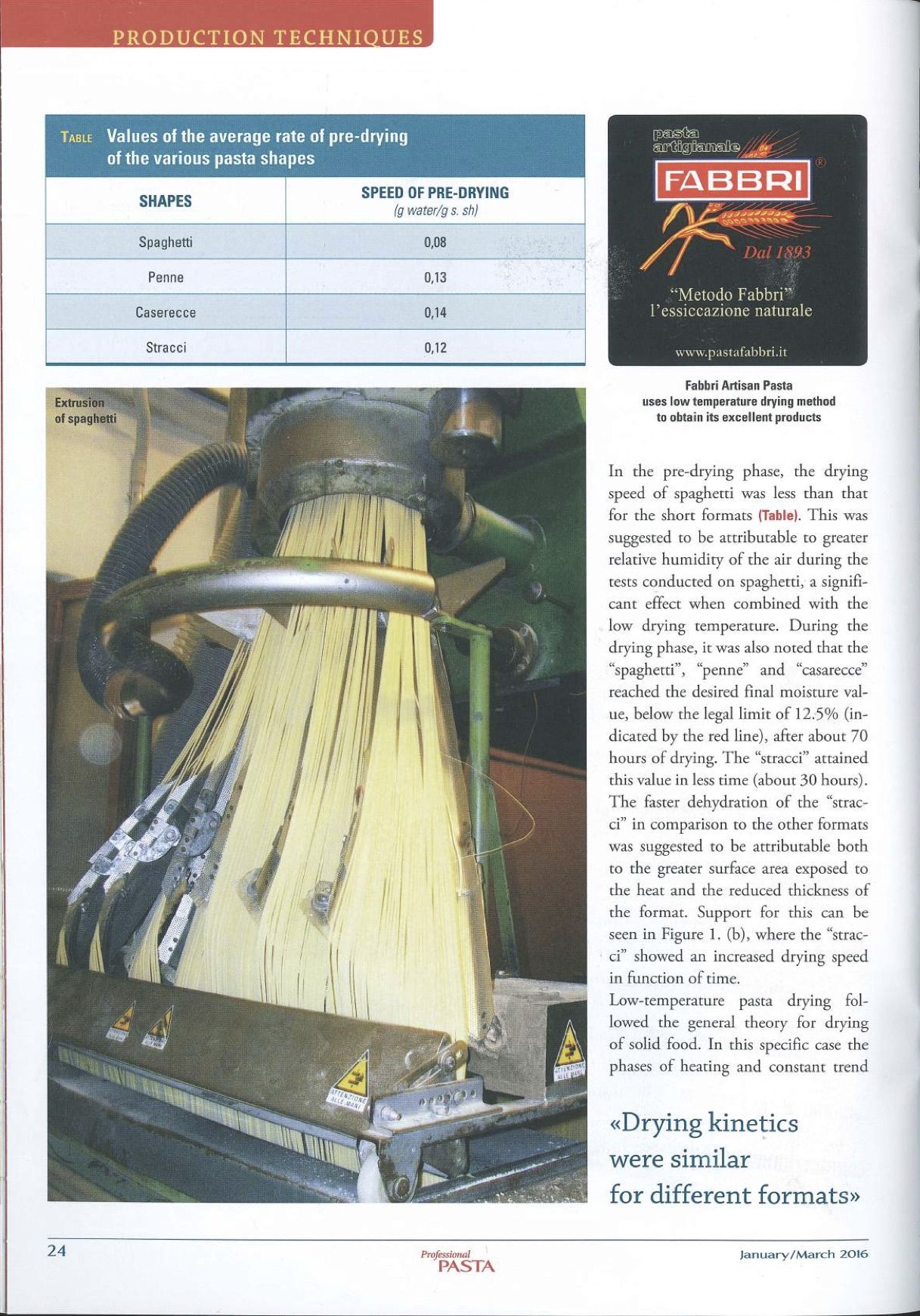 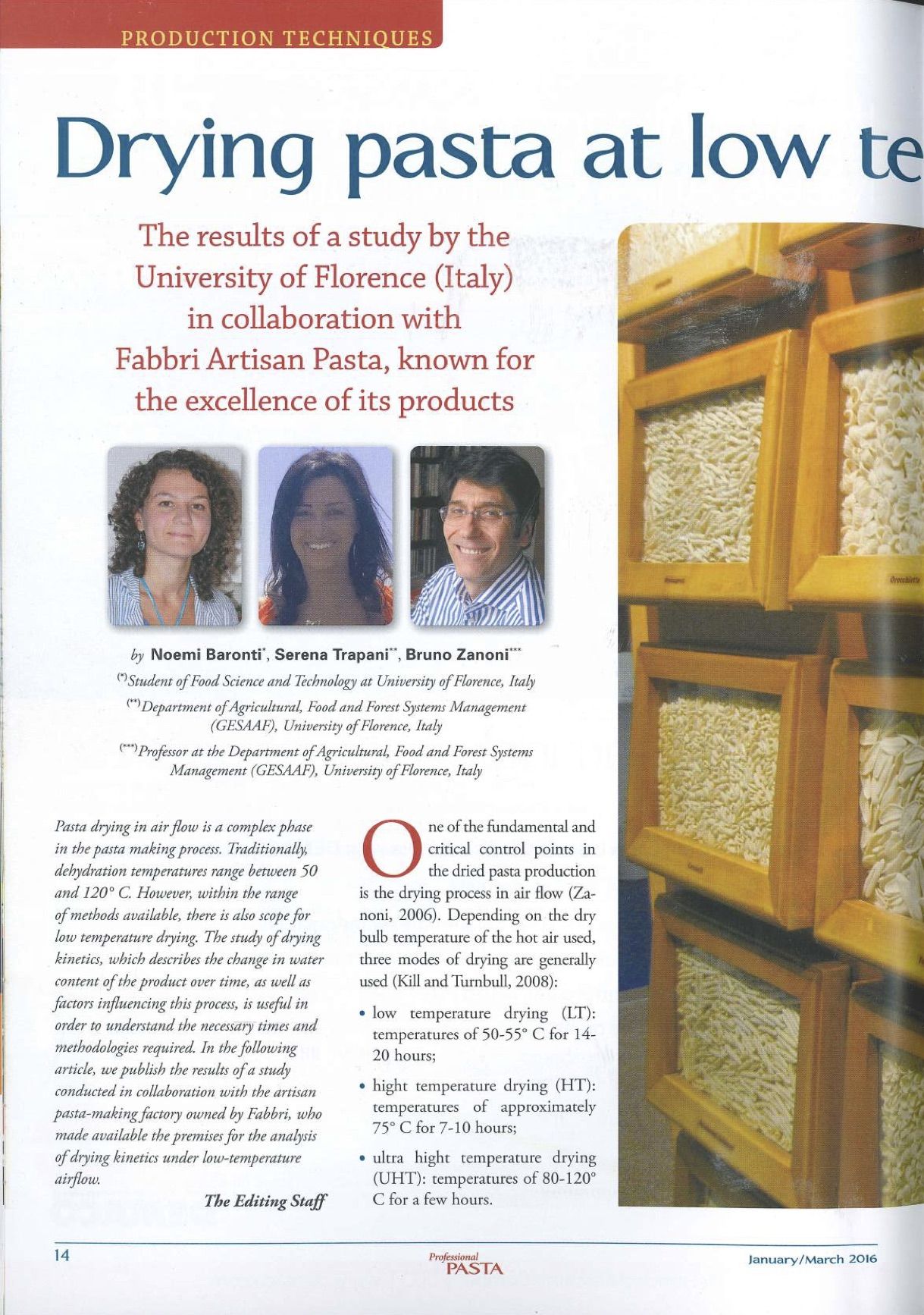 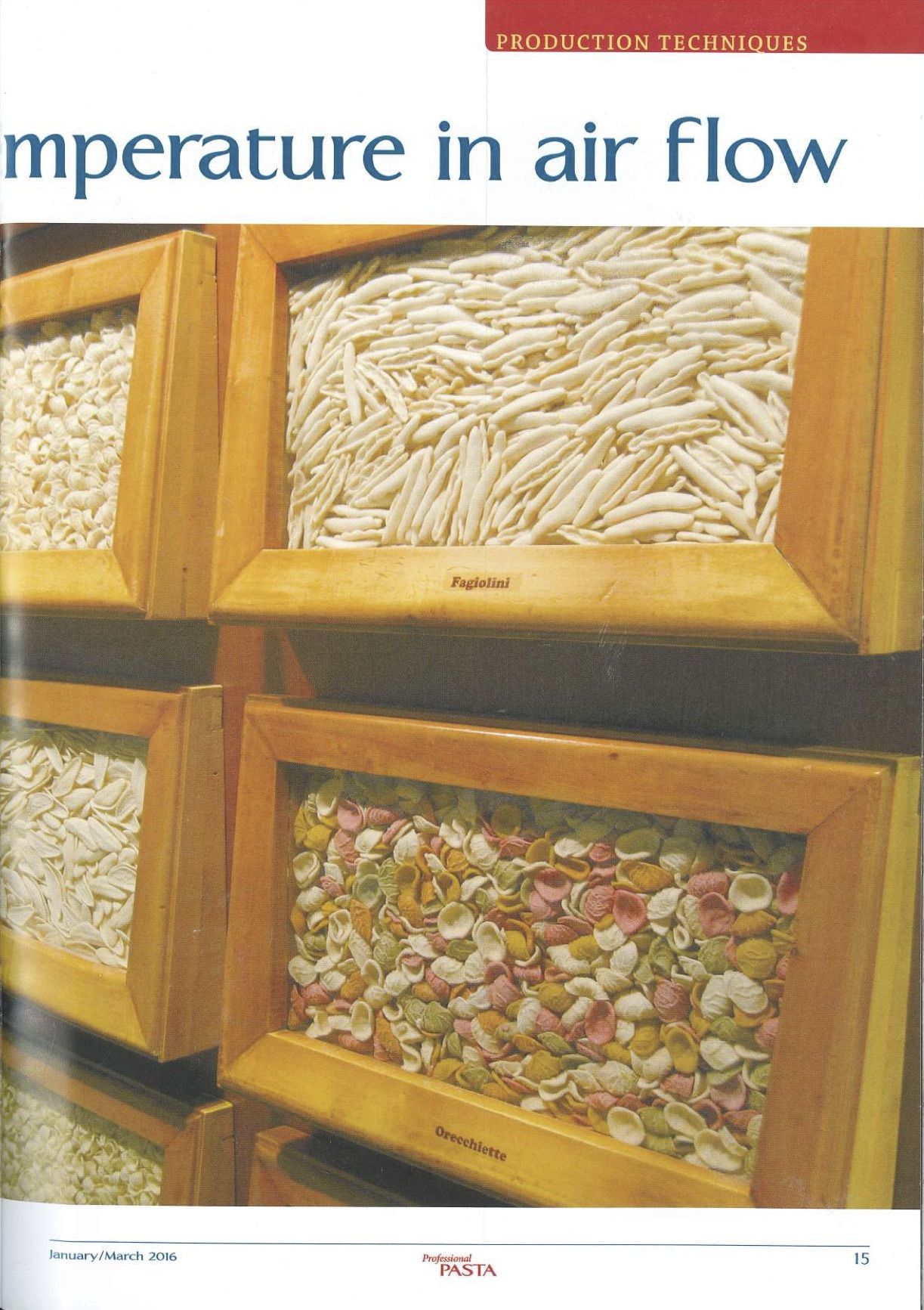